Managed by Rhys Grenham, Boars Head Farm was purchased by his grandparents in the early 1970’s. In 1978 they purchased their first Simmental cattle which became the foundation of the Eridge herd. Tom Stephens built upon the early purchases at “Simmental 78” and became well known within the breed. He then went on to purchase his first stock bull Sterling Golden Bull at the Simmental Spring Special 1979 for the top price of the sale.

Sadly due to ill health in early 1981 the Eridge herd had to be dispersed. Later in 1981, Rhys’ parents, Peter and Lynn Grenham, purchased the farm and have been farming there since 1982. Peter has been involved with the Simmental breed since their original importation, working with the Forstal herd (K McAlpine) and the Lindridge herd (J Marshall) and he has also been heavily involved with the South East Simmental Group holding positions of chairman and secretary. 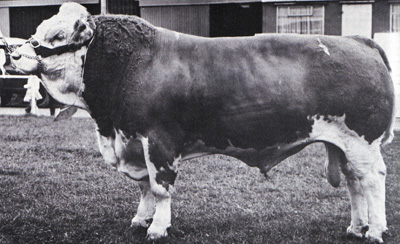 Boars Head is a small grass farm and has been used in the past as a holding for rearing and preparing many animals for show and sale for other breeders and clients. This was ceased when half the farm was developed into a golf course and Rhys took a wider interest in showing and breeding of Simmentals and since 2003 has featured on the show circuit under his own name.

The herd now numbers just shy of 20 head including 11 breeding females. In 2000 new bloodlines came in to the herd to replace some of the older generation females, with the first purchases coming from Ann and Tony Jukes’ Swallowhill herd. These included Hockenhull Natalie 15th, a daughter of Well House Dictator; Revelex Therese, by Rickardstown Jumbo and Swallowhill Karina by Camus Brandy.

Later in 2002 Wistow Grace 40th was purchased as a yearling heifer from John Vance, Cambridgeshire. Grace is by Curlieu Jasper and has since formed the mainstay of the herd, with some quality females coming from her. 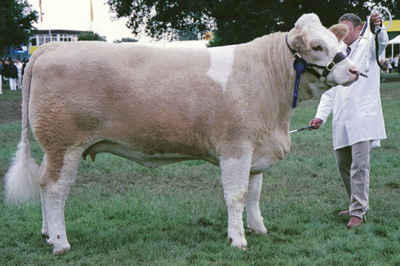 In 2009 two new females joined the Boars Head herd in the form of Oakhill Nelly 20th, by Popes Laird, who was purchased from the Bristol sales. Joining her was Oakhill Nelly 21st, who is by Starline Klassic. 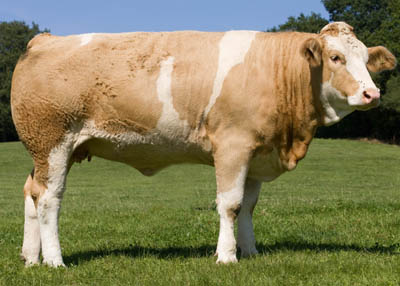 Then in March 2012 an outcross of female lines was added to the herd in the form of Hockenhull Trudy 36th, purchased privately from Ann and Tony Jukes. She is by the ET-bred sire Hockenhull Norman and is out of a Blackford Harvester daughter.

In terms of bull power, the proven sire and Cankern Titan son Seaview Prince Charming was purchased privately from Killbride Farms in Northern Ireland. Sadly no longer with us, he has produced some great males and females in the herd, many of which have featured on the show circuit. A daughter of his won the inaugural Leading Ladies championship in 2012 and sold for 5600gns and a son of his sold for 7200gns in Stirling for us.

Another proven sire that has been used in the herd and shown successfully, was Dirnanean Shane, this time purchased in partnership with Messrs C H Carter and Partners of the Beeches herd in Essex. 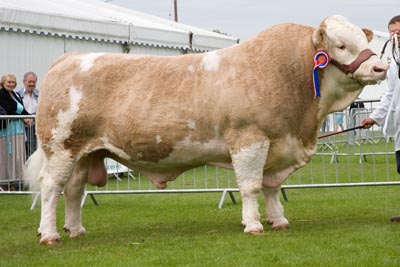 Shane is a son of Starline Nelson and was bought in readiness for running on Charming daughters and as a new stock bull for the Beeches herd. Shane secured countless championships on the south east show circuit before a half share was sold to the Beeches herd.

Replacing him and writing a new chapter in the Boars Head herd history was Clonagh Buckarooney Truly, who was purchased at the Irish Simmental Society’s Premier Show and Sale at Roscommon in March 2012 for €6000.

Bred by Garrett and Lyndsey Behan, Co Laois, he is by the three times National Show champion Banwy T-Rex, a sire who is breeding some phenomenal cattle in the Clonagh herd. His dam, Clonagh Truly Scrumptious is a stylish ET-bred daughter of Raceview King out of Clonagh Edel, a Hillcrest Butcher daughter.

He is full brother to Clonagh Awesome Truly who was champion at the National Ploughing Match in 2010 and is three quarter brother to the three times National Champion Clonagh Absolutely Fabulous. He was purchased for his fantastic bloodlines and his natural fleshing ability, kind nature and correctness and will be used on Seaview Prince Charming daughters. Calves are due spring 2013. 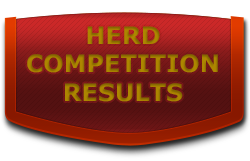 Every year we enter the South East Simmental Group Herd competition and we have been successful on many occasions.