Grace was bought privately in 2002 as a yearling heifer and was then shown successfully as a two year old heifer the following year. Sadly no longer with us, Grace forms the mainstay of the Boars Head and has bred well.

Karina was bought privately from Ann and Tony Jukes and she has bred exceptionally well for us, producing six prize winning bulls, including Boars Head Volcano, an Omorga Prince son, who won countless championships in 2008. Karina currently has a strong heifer calf at foot by Seaview Prince Charming.

A half sister to Karina, Swallowhill Miranda who is by Balmano Hitman, was also purchased from Michael Hind. Miranda has bred consistently well to Seaview Prince Charming, producing Boars Head Miranda 2nd who was reserve female champion in Stirling in October 2011 and sold for 2000gns to James Hunter.

In 2013, Gerald Smith purchased Boars Head Karina 2nd for an undisclosed private price. Karina, is by Prince Charming and out of Swallowhill Karina. 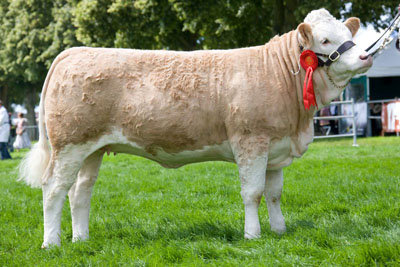 Meanwhile, Nelly 21st, has equally bred well with one daughter by Seaview Prince Charming , Boars Head Nelly 2nd, standing second in her class at the South East Calf Show held in conjunction with East of England Smithfield Festival in 2011.

Meiersli 13th has bred well for us producing Boars Head Tornado, a Starline Klassic son, who sold for good money to a commercial herd, as well as Boars Head Meierisli 5th, who won the inaugural Leading Ladies championship in Carlisle in August 2012 and went on to sell for 5600gns.

Meierisli 11th was purchased in 2009 and has produced us a great heifer by Seaview Prince Charming.

Trudy was purchased privately from Ann and Tony Jukes in March 2012 having originally been purchased by them at the Hockenhull dispersal for 11,000gns. She was bought as an outcross bloodline for the Boars Head herd and has produced an impressive bull calf by the 8000gns Sacombe Balmoral.